For our final day in Sydney, the sun shone wonderfully throughout the day, making it very welcoming to venture outside.

We quickly headed out for breakfast to Caffe Tiamo once again (guess that gives an indication of what we thought of the place) and enjoyed a filling breakfast to get us through the most part of the day!
Upon leaving, I noticed some pretty awesome light decorations.  Almost made me want some…

We then headed towards Darling Harbour to board a ferry heading for Taronga Zoo!  Along the way, we of course walked through the Chinese Garden of Friendship again, and stopped to take a few snaps now that the weather was a bit nicer! 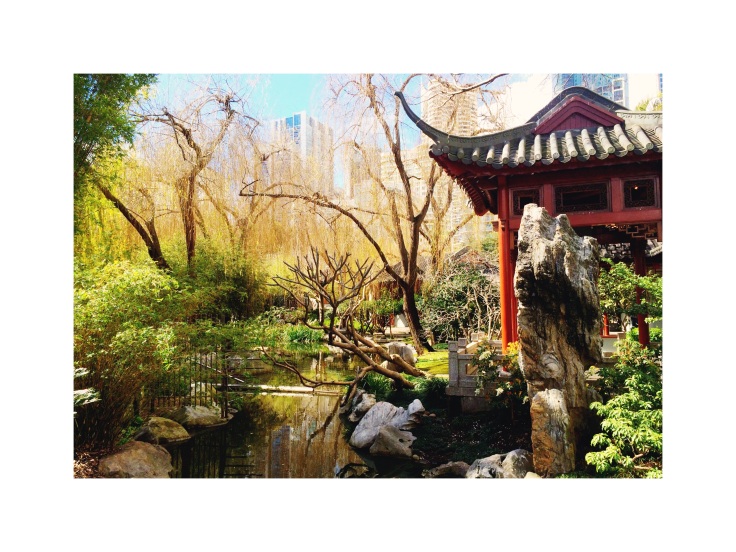 After arriving at the zoo’s ferry dock, I was very quick to pull out my phone and camera and snap a picture of this bird.
Still not sure what sort of bird it was… 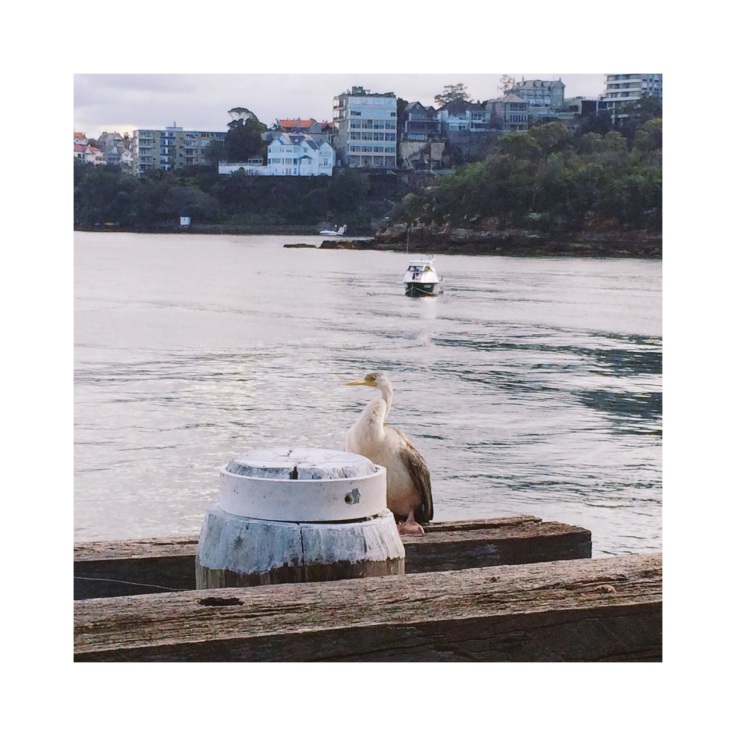 It was then time to ride the chairlift to the zoo!  Was a very interesting way to get to the entrance of such a place, but I enjoyed the ride!  Got a fairly good glimpse of the elephants along the way!

Upon the somewhat rough landing from the ride across the length of the zoo, we quickly headed toward all the attractions as there was no time to lose!  For some moments during the day, I used my camera.  For others, I used my phone…like when my first battery died and it turned out my second battery for the camera wasn’t charged either.  OOPS.  I don’t recommend forgetting to charge the second battery like I did.  Upside was I remembered to bring both my telephoto lens and my portrait lens (which works well in low light conditions).  Here’s a collection of some of my phone snaps throughout the day! 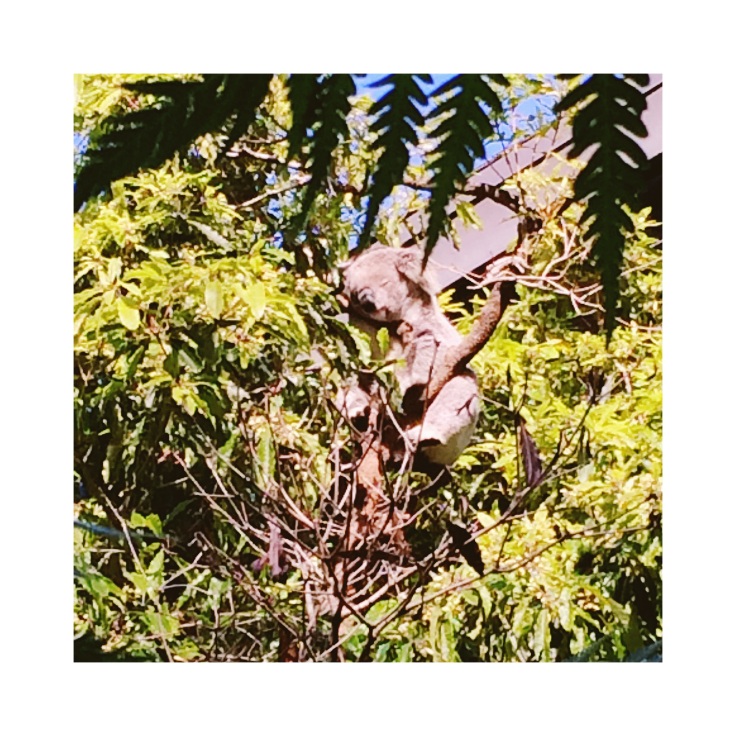 This guy (komodo dragon) literally came from the back of its enclosure, walked along the side, then met me in the middle at the front and sat like this…then waddled off again when I was done snapping pictures.  Gotta love reptiles.  It seemed many of them had these antics. 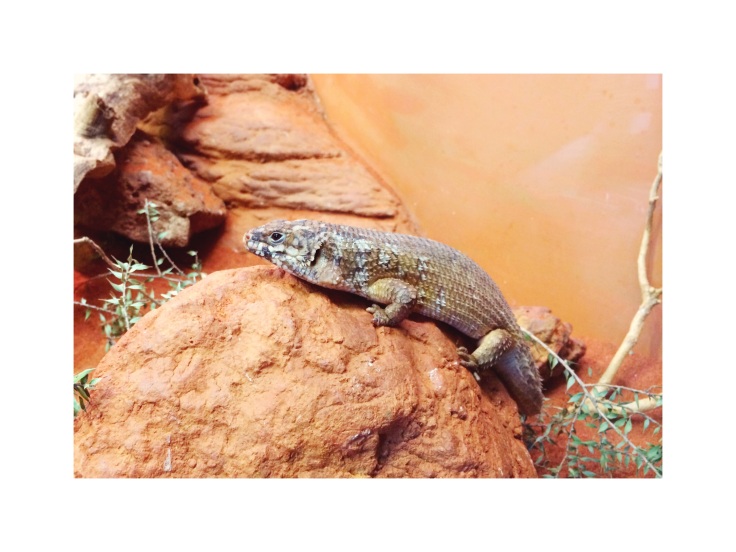 This bird just watched me like this as I snapped away.  I absolutely loved the colours of its feathers.

A snap with the host of the free flight bird show after it was over.  By this point, my camera had died, which was a pity because the bird show was spectacular!

Below, oh my silly but wonderful man taking a ‘nap’ on the bear statue. 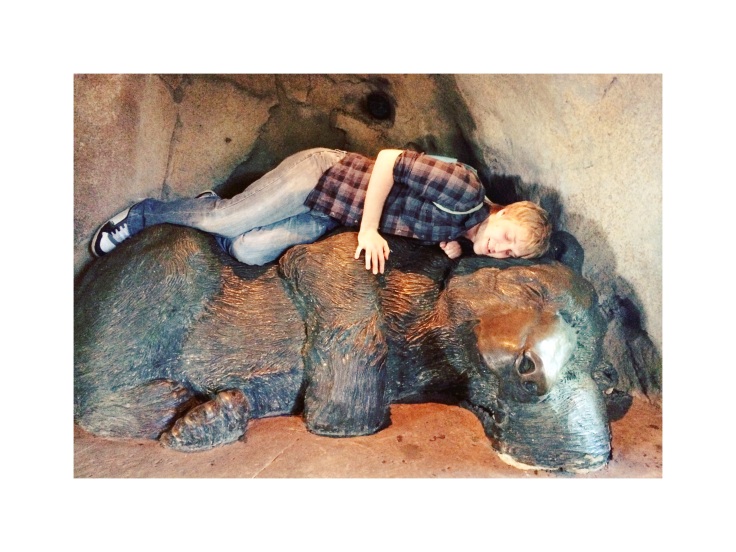 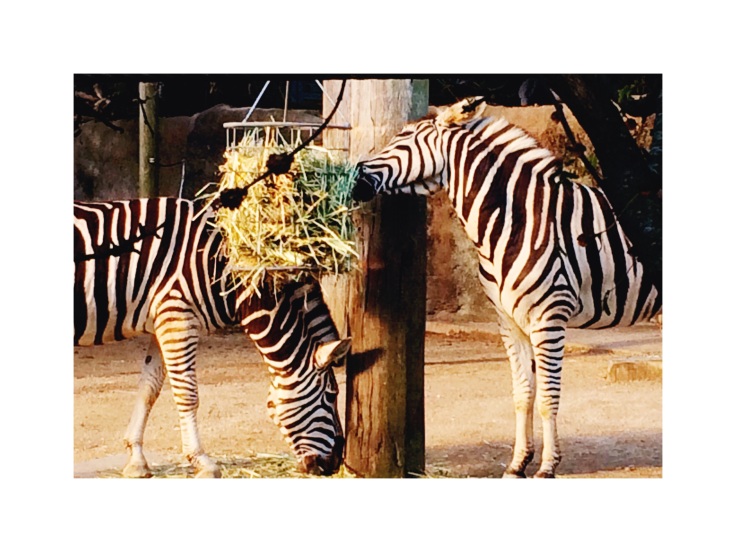 …and the final animals we got to see…zebras!  They were eating though, so it was hard to get any shot that varied from this.  Still cute though. 🙂

It was then time to head back to the ferry because the zoo was closing…but we quickly stopped by the souvenir shop to ‘adopt’ a toy orangutan.  I named him Alfred (Alfie) because I can.  It’s nice to know that all the money I used to purchase it goes towards animal conservation!  Anything to help. 🙂
Thought it would be somewhat different to snap Alfie looking out the window of the chairlift as we hovered over the elephant enclosure of the zoo.  The golden hour light hit that orange fur well too.

On the ferry, I thought the view through this window looked quite nice, so I of course snapped the moment!

Sydney Opera House as seen from the ferry…

…and the Sydney Harbour Bridge as seen from near the Luna Park ferry stop.  The setting sun poking into the frame looked quite nice, so I kept it in the shot.

As we arrived in Darling Harbour again and were starting to walk back into the city, we saw a large crowd by the stairs.  There were some dance offs going on with a dance crew.  This moment shows when they called a young boy in to learn a dance with them, and incredibly, the boy was pulling off many of the moves straight after seeing it like tumbling and cartwheels.  It was like watching monkey see, monkey do, but was great entertainment! 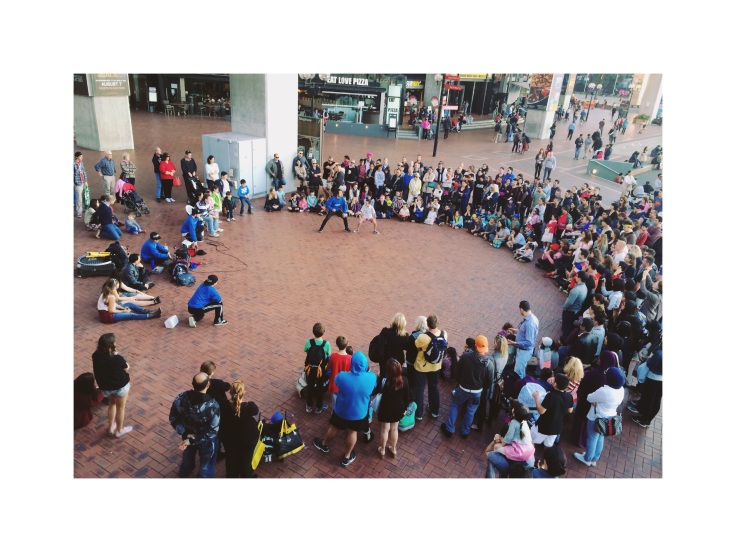 Just before that, I had been given some flowers by a random lady walking along the harbour (who appeared to be handing them to several people).  It was a rather nice gesture.  Wish I would have been able to keep them for longer, but I had to say goodbye to them this morning because it’s a plant and you can’t fly with plants. 😦 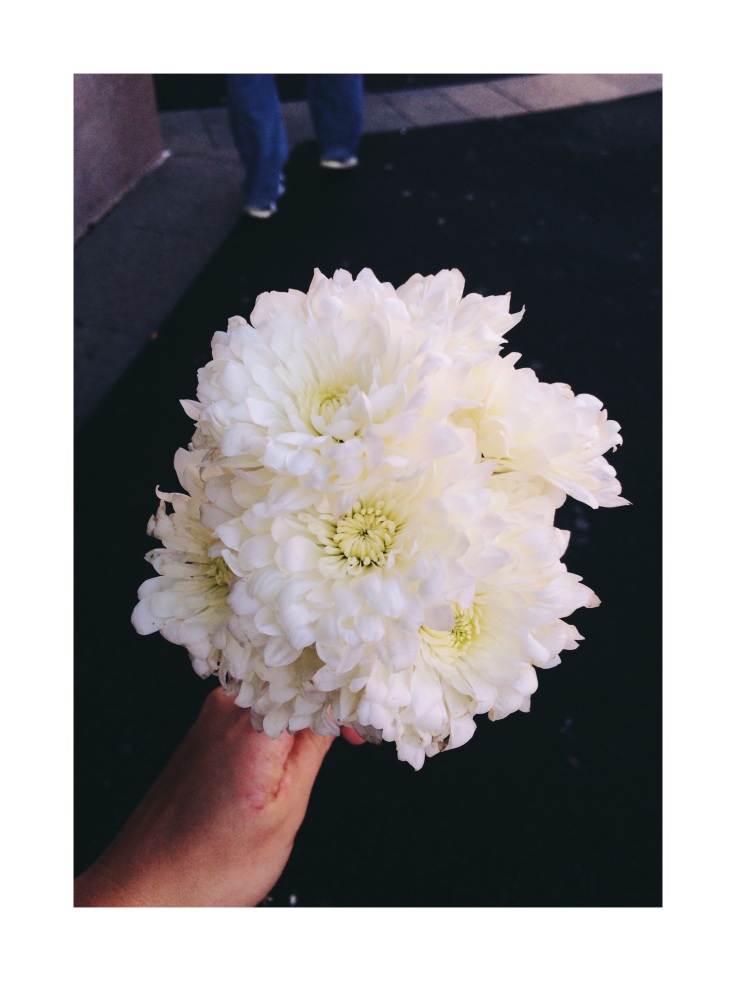 Along the way back we saw this woman drawing out the front of the Queen Victoria Building.  It looked quite fascinating what she was doing, and I really wanted to look at the postcards, but we were running out of time before our next outing…

…and this is where we were going!  When we heard the news that the first episode of Doctor Who Season 8 was going to air in cinemas, we were very quick to buy our tickets.  My partner is a massive fan, and he got me into the show, so you can only imagine that we had excitement written on our faces! (No spoilers again) I enjoyed all the extras before and after the episode.  Helped make the price very much worth it! 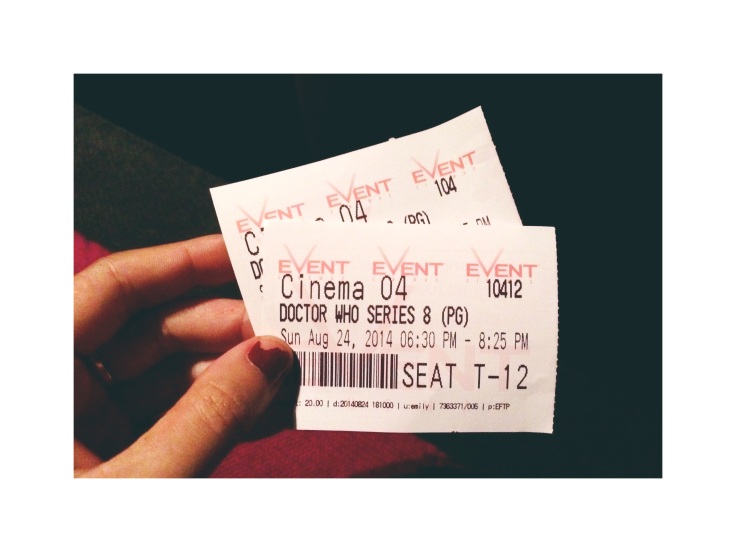 Along the way on our adventure to find some dinner we came across this bakery with an awesome window display of sea creatures made of bread.  The entire length of the window had these marvelous creations!  Couldn’t resist taking a photo.  Wish I noted down the name of the bakery though.  I would definitely recommend checking it out with those little masterpieces made from dough. 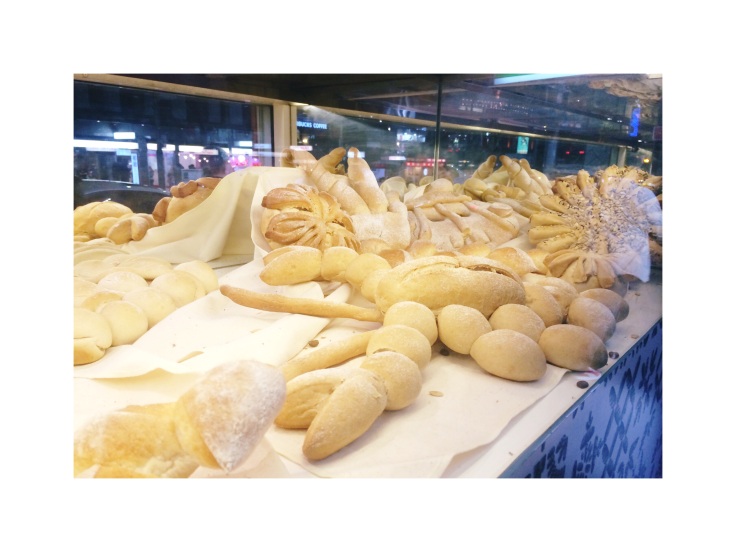 For our late dinner, we dined at a place called Macchiato.  Seeing as we ate something shortly before our movie session, we shared a pizza among us.  I had never eaten artichoke before, but it worked on the pizza we had.  I quite liked the combination of flavours!
This is the only shot I got of it however…because we had already eaten more than half of it.  Oops.

Random moment when I noticed my partner’s face in the reflection of the spoons.  He of course could see me as well on them.  I was very easily amused however and had the need to take a photo. 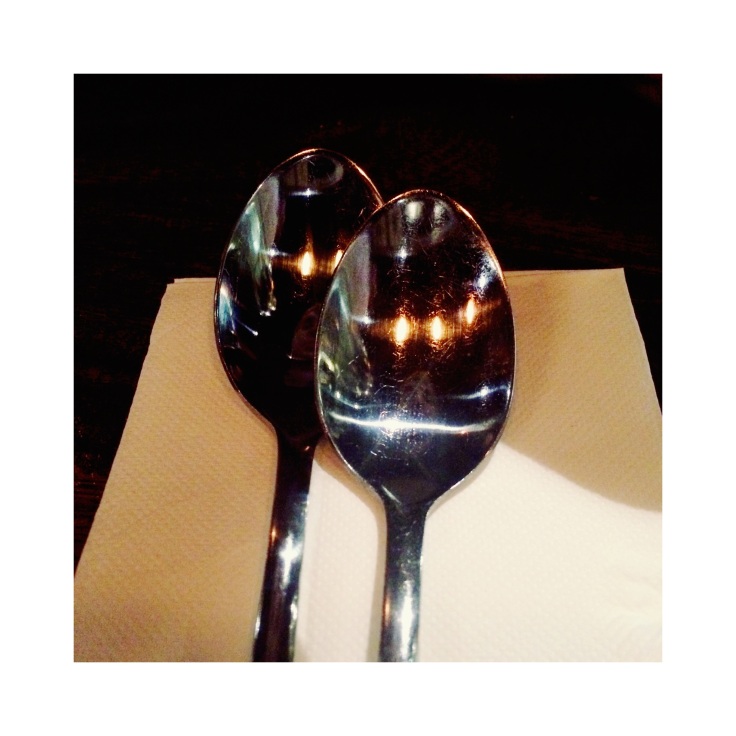 …and dessert!  It was a chocolate tart with vanilla ice cream, drizzled chocolate and a strawberry.  Yum!  Those three flavours are always a wonderful combination.  Review of course will be with the others from the previous days on our trip.  This was also our last meal before we’d be leaving the city of Sydney, back for our home in Brisbane. 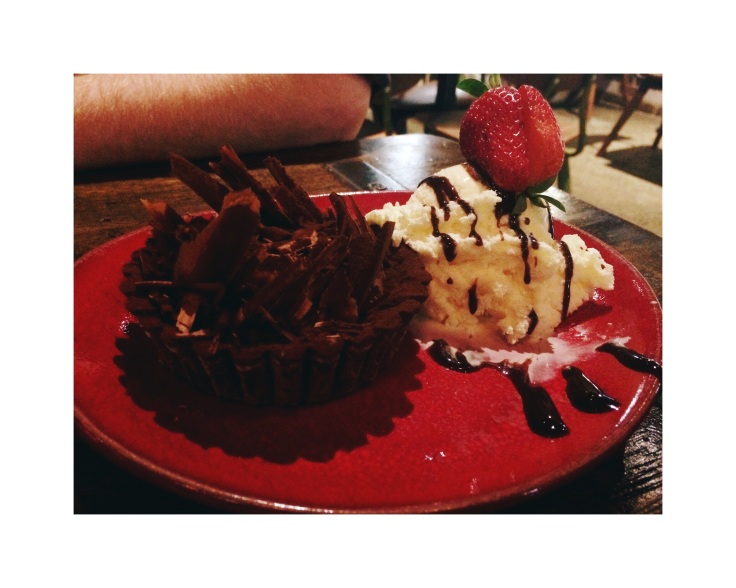 Next morning…
We woke up at 04:15 so we could catch our 06:20 flight on time.  I’m not a morning person, so this was a lot of trouble for me, haha.
On the plane, I had my stuffed toy bought from the aquarium which I named Meredith under my seat.  She wasn’t going to fit in any of our bags, so voila…I had a large penguin staring at me from under the seat.

We were also put in a holding pattern over the Gold Coast for a while, so I snapped this shot…it looked somewhat mystical with the clouds appearing the way they did, and I loved that you could see the waves crashing on the shore. 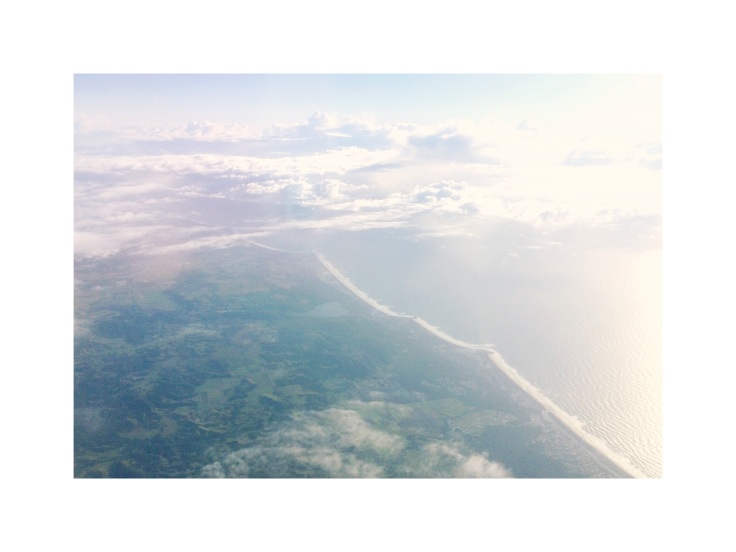 Shortly after, we had landed, and it felt strange knowing our adventure was already over.
All I know is that I truly love travelling and love being able to travel with my partner.  We’re going to have to jet off on another adventure soon because it’s wonderful having that time together! 🙂

I think it’s time for bed now.  It has been a long day.

5 thoughts on “Final Day in Sydney – Taronga Zoo and Doctor Who!”